What's on your mind?

It would mean a lot to me,,, It is a safe space for many user(s) and it has over 2000+ pages of which will be deleted in about a month, Thank you so much if you have signed / shared, btw it costs nothing, so dw abt that. Anyone can create / sign a petition there for free ^^

Have a good day / night,

It was weird because I was living through the story that was being told. The story went something like this, the hunter association is on the dark continent (but their wasn’t any recognizable characters) and one group was being attacked by some creature from the dark continent and got whipped out. The next group braced for an invasion, and was inside some sort of castle before a weird creature appeared, and then suddenly gon appeared, and took out the creature with his fishing rod. But then the manga went back on hiatus, and the rest of my dream was uneventful.

I don’t mean that Togashi has recovered and returned.

About an hour ago, I found out how to upload to fanfiction.net. Both of the first two stories I intend to post are related to Hunter x Hunter. One of them was already written and posted to Quora as an answer to a question about who would win a fight between the Phantom Troupe and Akatsuki. I have not submitted that to fanfiction.net.

Note: Fanfiction.net has some special rules that it’s fanfic writers have to agree to every week.

The one I’m currently writing brings Gon and Killua into the world of One Piece.

I will start it off by having Gon and Killua making a raft to sail and visit Kurapika, only for them (not including Kurapika) to be hit by a magic tornado and fall unconscious.

When they come to, they find themselves tightly hugging each other aboard the Going Merry (the tornado dropped them off at a random part of the Grand Line). They are greeted by the Straw Hats (which at this point includes Nico Robin).

Elsewhere, Illumi manages to assemble a few people and form his own pirate crew. He finds out that Killua is on the Straw Hats’ ship and goes to the marines. The marines give Illumi approval after he tells them that he’s going after Luffy.

Over the course of the story, Killua and Gon start to develop feelings for each other (or come to realization if the feelings already exist, whichever one you commenters think is better); Nami finds about about this before either of them do.

Killua, Gon, and the Straw Hats encounter Illumi’s crew four times throughout the story, the fourth basically featuring Illumi as like the final boss in a video game. Using his assassin skills, Illumi manages to nearly kill all six Straw Hats (Chopper is not present in the final fight with Illumi) and Gon. Killua ends up sacrificing himself in order to defeat Illumi, but is either saved or revived by the power of love (no idea how I’m going to make that work).

Luffy ends up surviving because he’s Luffy, and the other Straw Hats and Gon survive because Chopper arrives in time

Killua and Gon say goodbye to the Straw Hats, and the story ends with them confessing to each other shortly before meeting up with Kurapika.

Anyway did i miss anything important?

This is not a diss on either series mentioned in the meme. 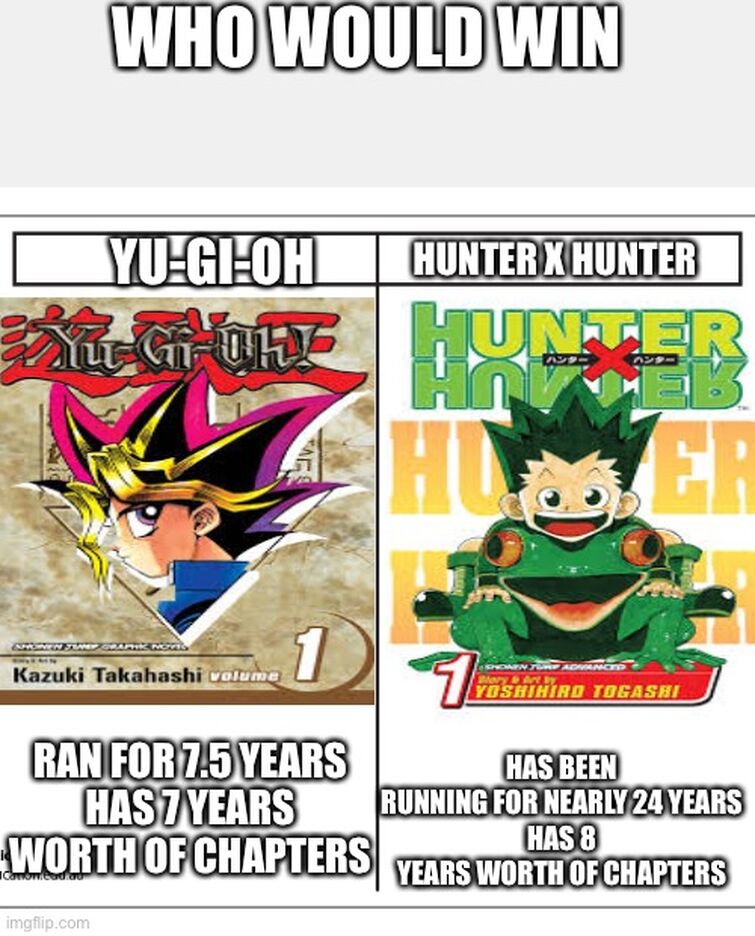 What do you think the future of Hunter x Hunter would be like if Kazuki Takahashi (the author of the Yu-Gi-Oh manga, which ran with 343 chapters from 1996 to its conclusion in 2004) too over writing it?

Why does Ponzu give me some serious Dragon Ball vibes, even though I have never watched or read a single chapter or episode in the Dragon Ball franchise? 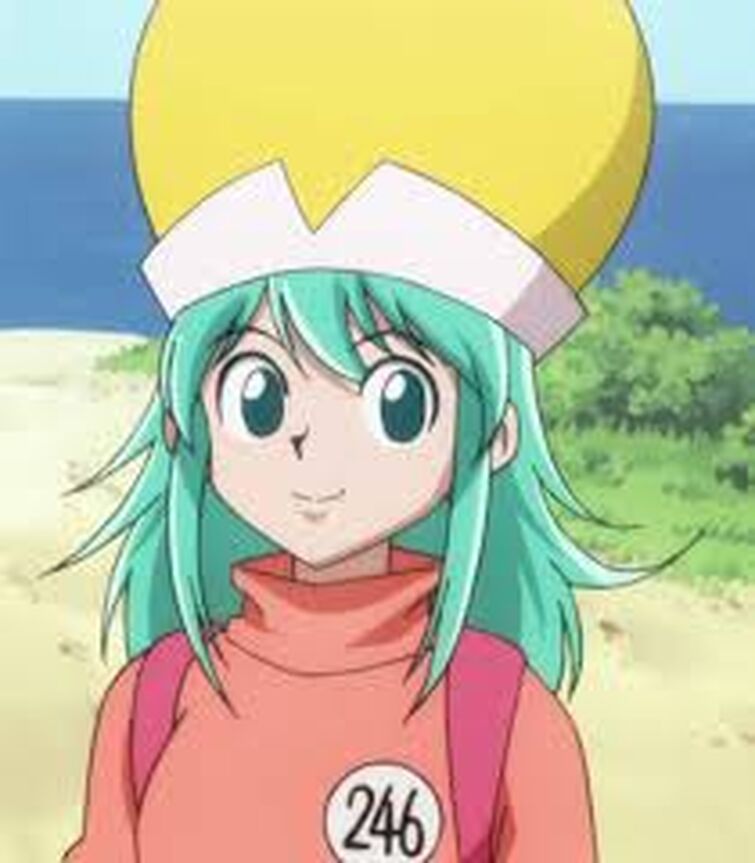 So I was watching Doctor mike on youtube and came across him reacting to a medical drama (I think) where there was this girl who couldn't feel pain or severe temperatures. she also couldn't sweat for some reason -3-

I don't have a chapter, or even a paragraph yet. I just have an idea, and I'm willing to take suggestions. I'll also be making a poll related to this idea shortly after I post this.

Ging Freecss
God No-
Yes I Am
I Don't Know
I Mean- Both Animes Took Ideas From Another So...
Results (Don't Click This One It's For Me)

What would happen if the ant queen decided one day to do a little bit of cannibalism?

Okay so... I've done some research based on curiosity and based on hair color and personality I have to guess that gons mother is none other than 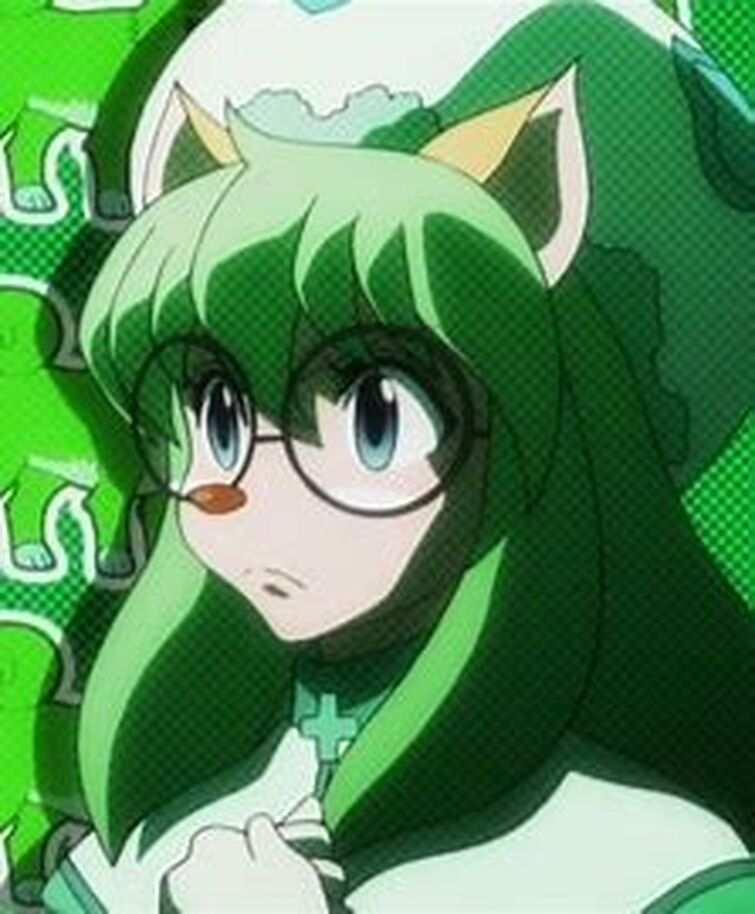 My friend and I are going to get matching Gon and Killua cosplays! (I wanted to cosplay Killua anyway)