View source
watch 01:36
We're Getting Mutants in the MCU - The Loop
Do you like this video?
Play Sound

The movie includes a canon flashback of Kurapika's childhood adapted from the special chapters Kurapika's Memories Part One and Two, which was a manuscript written by Yoshihiro Togashi that he eventually ended up scrapping from the main story. The plot of the movie itself is considered filler.

The movie is supposed to take place at the end of Yorknew City Arc (after episode 58 of the 2011 anime adaptation), but it has some changes that contradict the previous episodes and its ending don't fit with the next episodes of the anime. That being said, if one watches the movie between Yorknew City Arc and Greed Island Arc it still won't make sense canonically, but it is where it was supposed to be set.

Kurapika became a Hunter to take vengeance on the Class-A crime group Phantom Troupe who massacred his clan for their unique eyes (which are one of the 7 treasures of the world). The eyes of the Kurta clan turn scarlet in times of anger or emotional agitation and are considered the most beautiful treasures in the world. Kurapika continues to pursue the Phantom Troupe but an unknown party has stolen his "Scarlet Eyes". With the help of Gon, Killua, and Leorio, Kurapika's life was saved. However, the Phantom Troupe shows up before them and blocks their way. The true identity of the one with the No. 4 spider tattoo is about to be unveiled.

Note: The plot of the Hunter × Hunter: Phantom Rouge movie is not a part of the canon storyline.

The movie begins with Killua dreaming about his brother Illumi warning him to never make friends, claiming that eventually he will betray or get betrayed by them. He wakes up along Gon on an airship. Upon arriving at their destination, they meet Leorio and learn that he and Kurapika were investigating a rumor about a survivor of Kurapika's Kurta Clan until they meet a young boy whom Kurapika recognized as his childhood friend Pairo, who later attacks him and steals his eyes. Unconscious since then, Kurapika awakens beside the others, and soon after he has visions through his stolen eyes of a man whose right palm is marked with a spider tattoo, the same used by the members of the Phantom Troupe.

Based on other details seen by Kurapika in his vision, Gon and Killua leave him under Leorio's care and split up in search of Pairo's location. Gon ends up meeting and befriending a young puppeteer called Retz and when Killua reunites with him, they realize that Retz is a girl. When night falls, Leorio and Kurapika are approached by Hisoka. while Gon and the others are attacked by Uvogin, who was presumed to be dead and saved by Nobunaga and Machi who defeat him. It is then revealed that Uvogin was revived as a puppet by Omokage, a former member of the Phantom Troupe who was defeated and replaced by Hisoka. Omokage sends a team of puppets being four of the Shadow Beasts and one of Pakunoda to attack his former companions but they are all destroyed by them. After Omokage retreats, Nobunaga and Machi leave as well, warning Gon and Killua to not stand between Omokage and the Phantom Troupe as they have a score to settle with him.

The next day, Retz leads Gon and Killua to the mansion from Kurapika's vision and after leaving her behind for her safety, they meet another puppet, now based on Illumi, who attacks them. Illumi doll taunts Killua into running away, leaving Gon to be attacked. Just as the Illumi doll is about to steal Killua's eyes, Gon intervenes and has his own eyes stolen instead. Ashamed for failing to protect Gon and believing that he had betrayed his friend, Killua flees and contemplates suicide but is saved by Gon who had tracked him with his acute sense of smell. Gon then reveals that he had let the Illumi doll steal his eyes by his own volition so they could track down Omokage. He also states that he had long realized that Retz was one of his puppets as well. Reunited with Leorio and Kurapika, they set for Omokage's location to confront him.

Back at his hideout, Omokage reclaims his eyes from Retz, who is revealed to be a puppet made from his deceased sister, whom he sacrificed to obtain the first pair of eyes for his dolls. When Gon and his friends appear, he reveals that he let them track him down by purpose as he intends to claim Leorio and Killua's eyes to use on his puppets as well. After confessing to Kurapika that he also took part in the Kurta Clan's massacre and claiming that he currently has no other Scarlet Eyes in his possession, Omokage sends the Pairo and Illumi dolls to attack the Hunters, but Gon and Kurapika defeat them with Leorio and Killua's help and retrieve their eyes. However, Omokage activates six other dolls based on members of the Phantom Troupe to attack them but Hisoka appears to fight by their side. While Hisoka deals with three of the puppets, Omokage absorbs the other three to attain their powers and fight them until they join forces in a combined effort that allows Kurapika to successfully restrain him with his chain.

With Omokage defeated, Kurapika offers him a chance to survive in exchange for having his powers sealed for life, but he refuses. Killua offers himself to kill Omokage in Kurapika's place but the puppeteer is then stabbed by Retz, who claims that he had already caused enough suffering to her and her friends. The real Phantom Troupe arrives soon after, but decides to let Kurapika and Hisoka leave, claiming they'll settle their scores with them on a later occasion. As the whole place is put on fire, Retz decides to let herself be consumed by the flames along with her brother and thanked Gon and Killua for making it possible for her to lead a real life. As they watch the burning house from afar, the group contemplates on what Retz meant by a real life. Killua realizes that he does not have a purpose of his own yet, but decides to stick with Gon for the time being. Sometime later, Gon and Killua part ways with their friends as they leave to continue their adventures together.

Characters in Order of Appearance

Differences between adaptations and canon material 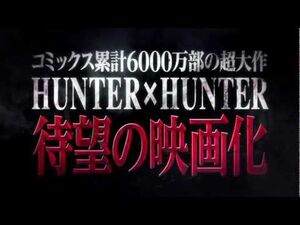