Many real-life weapons have appeared in Hunter × Hunter. While conventional weapons are still a threat to people with weak aura or combat skills, they have been proven to be quite useless against strong Nen users or high-level fighters. For example: 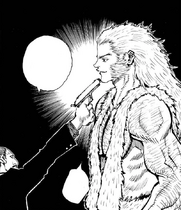 Shalnark manipulating a Mafioso with a machine gun

Retrieved from "https://hunterxhunter.fandom.com/wiki/Real-life_Weapons?oldid=273730"
Community content is available under CC-BY-SA unless otherwise noted.