Could someone who have volume 17 edit the "List of the 100 Designated Number Cards"?

I don't know about cards---are the cards in this page complete yet, at least those whose names were revealed? Esperancia 09:27, November 23, 2011 (UTC)

if you have them please feel free to add them. prefereably with the file name that has the same name as the city itself

Ok, this is something that does not seem clear to me from reading the manga. After Gon beat Greed Island, and they took the three cards with them, etc etc, did it end? Like could someone else play and beat the game?

Phantom Troupe stole a JoyStation with Greed Island. The JoyStation has 2 memory card slots (If you're thinking the bottom row of slots in the console and multitap are for memory cards, you're an idiot). One of them was occupied, leaving one empty slot. In the second slot, they put in a multitap, turning the one vacant slot into 4. Then, 2 members of Phantom Troupe entered, followed by 3 more. So somehow, they put 5 memory cards into 4 memory card slots. The maximum number of players on one console is technically 8, but there was no multitap in the first slot, making the maximum 5. But 6 people joined the game on that console. And no, the first person in it didn't die. He was shown to still be playing in the auction. TheRealKinne (talk) 02:04, April 22, 2015 (UTC)

I am wondering where are the locations on greed island (hunter x hunter). The
manga seems not to reveal this. I used the map at http://hunterxhunter.wikia.com/wiki/Greed_Island#Locations
and added some suggestions (in red). But I don't know where the map is coming from.
The title of the png is "Greed_Island_Map_(battle_collection_ver.)". What does
this "battle collection version" mean? If it is somehow correct then are my suggestions
also correct or do you think some places should be swapped? Mschr0der (Talk contribs) 15:40, June 10, 2017‎ (UTC)

Hello. That map is taken from the RPG, Hunter × Hunter Battle Collection. Not all villages/cities are spotted in the game, but I luckily got these: 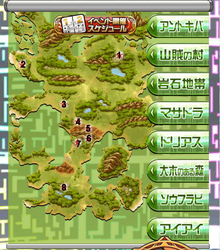 location icons
and other useless stuff

Retrieved from "https://hunterxhunter.fandom.com/wiki/Talk:Greed_Island?oldid=183135"
Community content is available under CC-BY-SA unless otherwise noted.